God’s own country is how Kerala , the state at the southern tip ( south-west ) of India is referred to very often. It’s also called the land of temples and churches. Lapped in verdant surroundings , I guess the state of Kerala offers serenity , the much-needed attribute for spirituality. It’s also the land of colours if you go by the Kerala mural art , so typical of the state.

Kerala mural paintings are frescos that depict mythology and some legendary heroes of the bygone era. The art dates back to the 9th – 12th century CE , originating in the temples , churches and palaces of Kerala , sometimes being referred to as temple art too . Mural art was expensive , as you will see later , and hence the patrons of the art were predominantly kings. 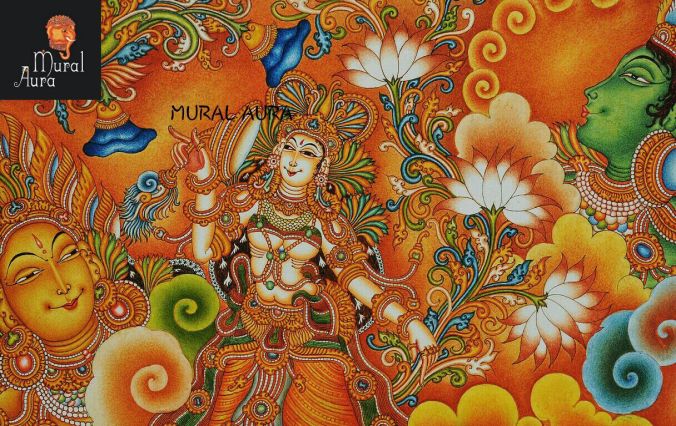 Patronised by the royalty , the art most naturally found its roots in subjects connected to religion and spirituality. Art of that era had no place for conflicts and causes , unlike today. So , the walls of palaces and places of worship became the canvas for mural art. The common man , like you or me , was far removed from owning the murals then , due to their high cost … and we shall see why !

Creating murals was and is time-consuming and laborious. Small changes have been made to suit today’s times in the process of mural art ; we’ll get to that in a bit. Back in history , the artists were mandated to follow certain religious customs before taking up the painting and conform to them till completion , as the subject of the art was primarily the gods.

The Wall had to be prepared

The wall was first coated with an admixture of powdered limestone , sand and gallnut soaked in water. Upon drying , a second coat of limestone mixed with sand , this time a finer mix , was smeared..Not done yet , a third coat would follow , this time around , a medley of finely powdered limestone with tender coconut water. The latter was applied twenty-seven times in between the drying. The wall would then be left to dry completely for thirty days , after which the artist could take up his brush and palette.

The medium for painting ( colours ) were pigments procured from natural sources. Just five colours called ‘panchavarna’ go into mural paintings even today , though the present generation of artists have resorted to acrylic colours , simply due to the astronomical costs of procuring natural extracts for the hues.

Mural art employs the science and psychology of colours in its choice to depict characters and moods.

FYI : The above three traits are classified into three attributes , ‘gunas ’ as laid down by the Hindu scriptures in that order : Satvik , Rajasik and Tamasik.

The hallmark of a Kerala mural painting is the detailing and shading that go into it. Every square inch of the painting is painstakingly detailed by the artist , evident in the blending of the colours , the fine grading of the shades ( remember the five colours only ? ) , the intricate lines that define the curves of the characters in the painting and the light of play subtly brought out by the shading. All characters are curvaceous and well-proportioned. Some lines are created by joining tiny dots in close succession. I have been privy to this and its truly back-breaking !

Mural Art from Kerala is distinguished by its emphasis on and strict adherence to beauty , clarity and symmetry , not found in any other form of mural art around the world. Have you seen ‘evil’ made to look beautiful ? You can see it here in this art. Evil not glorified , but beautified in keeping with the essence of the art. A demon is also painted in as great a detail as a god ! The quality of being evil is portrayed in the act being painted , never in the demeanour of the character , maybe just a hint of it.

Proportion and pose are two other mandates for this type of mural art. Every part of the body of the characters in the painting must adhere to proportions laid down for the art. For instance , the neck is to be one-fourth of the face and so on. The same rule goes for depicting markets , animals , buildings etc.

So much hard work and so much time go into creating mural art even today. The artists of today have innovated and simplified it in various levels. Canvasses for the present crop of artists range from fabric to wood and the good old canvas. There are no more kings , there is not so much space. Some have embraced synthetic colours and brushes. The natural pigments do not have shelf life and there are no more makers of those arrow grass brushes !

‘Mural Aura’ , a family enterprise at Chennai has hugely popularized Kerala mural paintings in the city , elsewhere in India as well as countries abroad. Two women , a mother , Malathy Lakshman , the artist , her daughter , Chandra Lakshman  and her father , Lakshman Kumar came together to showcase the beauty of the art in all its finery. Chandra is an actor and a designer who adds creative inputs to the enterprise. 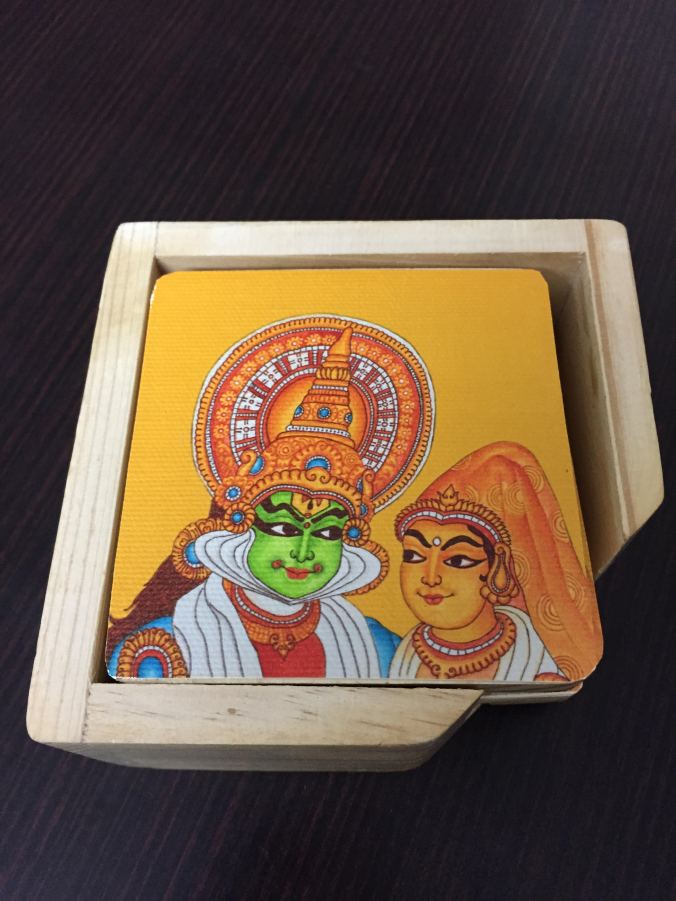 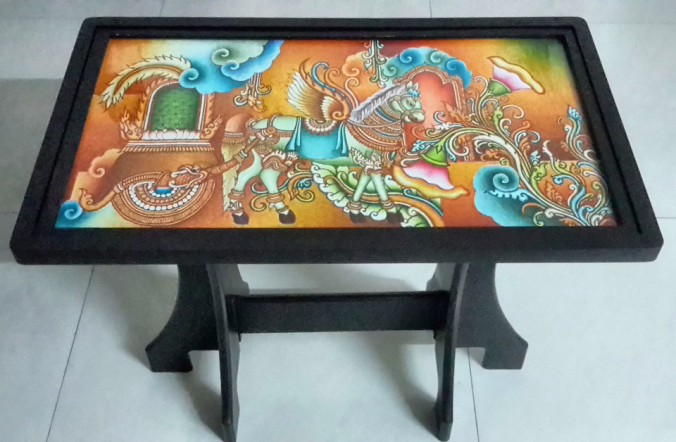 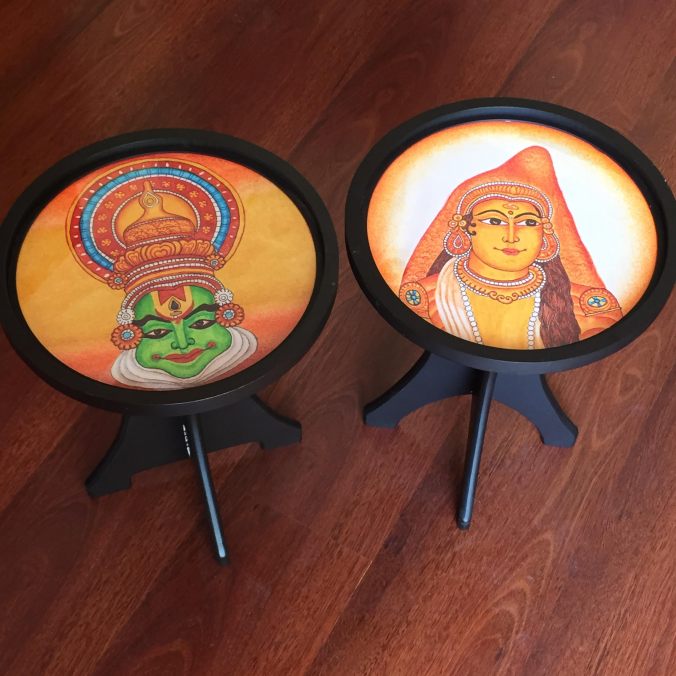 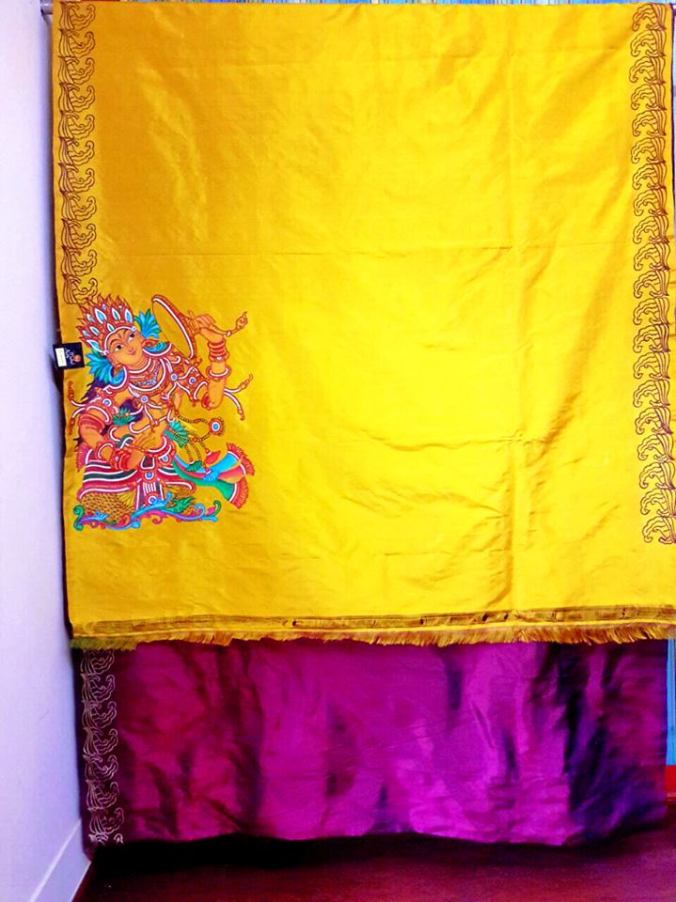 You want a hand-painted Krishna with a flute on your shirt ? Swan and peacock motifs on borders of a saree ? A mythological story on the pallu ? Mural Aura will love to do it all , merging art and fashion aesthetically. On silk and cotton only. Some of their customers not content with wearing the art on their bodies , spend time learning from them how to paint murals , so there goes training , another feather in their cap.

Mural Aura will transform the dullest of spaces into vibrant energy zones with their work. Respect for the creative trio !